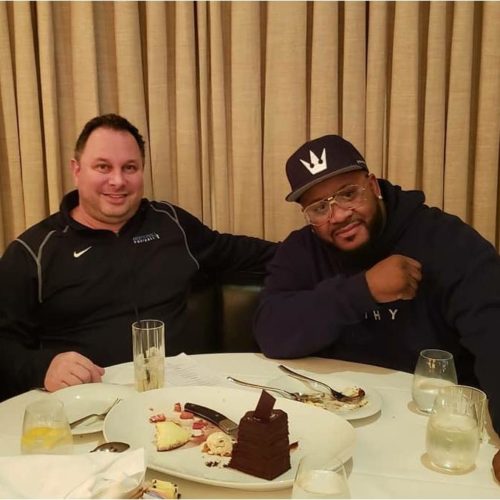 Red Coral Music and Fambiz Entertainment are pleased to announce their Joint Venture Red Coral Music will be a home for a diverse list of artistic talents and established names in the world pf music.. Larry Meistrich of Red Coral Music is a well-known film producer, also known as the founder and chairman of Diginext Studios and The Shooting Gallery, an independent film distribution company. He has produced many successful films, including Sling Blade, Belly, New Jersey Drive, You Can Count on Me and the just released HoodPranks The Movie (with Fambiz Entertainment). He is a recipient of an Independent Spirit Award You Can Count On me, and an Academy Award win and nomination for Sling Blade and You Can Count On Me, respectively. Both Belly and New jersey Drive’s Soundtracks went Gold. Following a successful career in production, he went on to found NEHST studios, a distribution company that churned out many successful independent films. NEHST combined with another studio to create Red Coral Releasing, which today has an ever-growing network of films, the most recent being Fambiz Production’s HoodPranks, a satire akin to Jackass set in the inner cites of Paterson and Newark, New Jersey as well as The Bronx. He founded Red Coral Music in 2019, a music production company that works with established music studios with the aim to release and market music from up and coming artists as well as creating soundtracks and scores for the films he is producing.. He is a savvy business man and marketer in addition to his accomplishments, and looks forward to the new opportunities that will arise from the merging of these two already flourishing companies.

Chaca “Fambino” Murphy aka The GODFATHER of Hoodpranks is the CEO of FamBiz Entertainment, writer and executive producer of HoodPranks the Movie. Fambino’s strength in film and music have come naturally due to his long term experience in the industry on both sides of the table. Fambino began his career in the music industry as one half of the successful rap duo Babalu Boys signed to A&M/Tuff Break records. Familiar with the struggle of an upcoming artist while understanding the passion and dedication needed to make it to the top, it was an easy move from artist to executive at Warner Bros. Records. Under his tenure at Warner Bros Records, Fam saw the success of the following artists Jaheim, Leelah James, and Sporty Thieves. He is also responsible for the discovery of the popular hip hop/R&B group Total. With strategic collaborations through top production houses like Big Stomach Productions, Pulse Music, IMI Studios as well as a supporting team with Anthony Ciccilini (General Manager), Alec Murphy (Chief Marketing Officer) and Phya Harris (Chief Operating Officer), all artists can rest assured knowing their project is in good hands.

With the unification of these two talents, the newly formed company aims to continue to manage and produce new artists trying to make it in the music industry with the unique resources of both companies. The goal is to do so in the traditional sense of a label, while also factoring in the benefit of the chairmen’s prominent roles in film, TV and music—giving artists a sure-fire opportunity to be featured on soundtracks and projects and create scores, thereby giving them the ability to be marketed and distributed through pre-established channels of entertainment. Artists already represented include Brixx, Malik Johnson’s Big Stomach Productions, Payson, and Staii Winning, among others. Meistrich and Fambino are thrilled to be working in tandem to discover new talent and take the next step towards building a successful company together.

Hoodpranks music volume one on all streams..

Confirming multiple reports this morning, TenthLetterMedia & Straight Official Magazine  are saddened to hear of the loss of not one, but two icons of the music industry. Music executive Andre Harrell has died at the age of 59, and Rock and Roll legend Little Richard has also died at the age of 87.

Harrell, the founder of  Uptown Records is remembered for his many accolades of achievement upon the industry, including the discovery of Hip-Hop mogul Sean “Puffy” Combs. Richard was, is and will always be the greatest inspiration to any artist in the music industry and was both groundbreaking and fearless in his journey.

We offer our sincerest condolences to all of the families, friends and fans of these two legendary musicians.

To celebrate today’s 25th anniversary of Mobb Deep’s iconic album The Infamous, Vevo connected with rapper/producer Havoc for an exclusive interview to discuss the shoot locations and inspirations behind the album tracks “Shook Ones (Part II),” “Survival of the Fittest” and “Give Up the Goods (Just Step)” and Prodigy’s influential fashion style as well as his perspective on the album’s legacy.Vevo is sharing The Infamous music videos and quotes from their interview alongside Mobb Deep’s 25th Anniversary Reissue of the album to their millions of followers on Twitter, Instagram and Facebook. The presentation should engage both longtime Mobb Deep zealots while enticing a new generation of rap fans, curious to learn about this key title in hip-hop history.

Straight Official Magazine and TenthLetterMedia are saddened to hear of the death of FRED THE GODSON this afternoon. The Harlem MC had been battling illness due to the Coronavirus and was last seen via Instagram on a respirator.

HipHopWired.com reports on this developing story as the Hip-Hop community has been collectively mourning the sudden loss of such an immense, upcoming talent. We offer our sincerest condolences to both his family and his fans.

To honor his memory, check out God Level which is available here for your listening pleasure.

The Brooklyn rap star Pop Smoke has been murdered according to TMZ, Pop Smoke was shot and killed early this morning in what appears to be a home-invasion robbery.

The suspects are still apparently at large. Pop Smoke was 20.

Pop Smoke, born Bashar Barakah Jackson, grew up in the Brooklyn neighborhood of Canarsie, the son of a Jamaican mother and a Panamanian father.

A promising high-school basketball career ended when he was diagnosed with a heart murmur, and he later turned to drug dealing, spending two years on house arrest on a gun charge.

Pop Smoke was relatively new to music; he released his first song “MPR” in December of 2018.

His rise was fast and meteoric.

Pop Smoke was the biggest star yet to emerge from Brooklyn drill, the mutation of the Chicago subgenre that also drew on the UK’s own version of drill music.

Working mostly with the London producer 808Melo, Pop Smoke developed a sound that was gruff and concussive but still catchy and occasionally melodic.

He released his debut mixtape Meet The Woo in 2019, and his single “Welcome To The Party” was a New York summer anthem last year.

Nicki Minaj, French Montana, and Skepta rapped on remixes, and Travis Scott brought Pop Smoke in to appear on “Gatti,” a track from his Jackboys compilation.

Pop Smoke had some issues with the police during his short career.

But his upside was tremendous.

Erica Mena and Safaree Samuels have welcomed their first child together, a baby girl!

“These last 24 hrs have been an adventure, to say the least,” Safaree.

“I’m a part of the #girldad club now.

Samuels and Mena, 32, announced the pregnancy in October, with Samuels exclaiming in the video, “I didn’t know I was capable of doing this!”

The first half of Super Bowl LIV was all tied up with the Kansas City Chiefs and San Francisco 49ers trading blows.

This year, global icons Jennifer Lopez and Shakira will star in the halftime show.

Sunday will mark the first time that the two recording artists who have combined to sell over 150 million records worldwide will perform on stage together.

The show began shortly after the end of the second quarter in the game between the AFC champion Chiefs and the NFC champion 49ers, which kicked off at 6:30 p.m. ET.

Both stars offered their thoughts on performing together for the first time during their pregame press conference from Miami.

Ever since I saw Diana Ross fly off into the sky at the halftime show, I dreamed of performing at the Super Bowl,” Lopez said shortly after it was announced that she would be taking part in this year’s Super Bowl halftime show.
“And now it’s made even more special not only because it’s the NFL’s 100th season, but also because I am performing with a fellow Latina.
I can’t wait to show what us girls can do on the world’s biggest stage.”

“I’m so honored to be taking on one of the world’s biggest stages in the company of a fellow female artist to represent Latinos and Latinas from the U.S. and all over the world — and to top it off, on my birthday!” said @Shakira.
“This is a true American dream and we are going to bring the show of a lifetime!”

One week after the emotional live debut of her new single, “Anyone,” at the 2020 Grammy Awards, the pop star proved her vocal talent yet again at Miami’s Hard Rock Stadium to kick off Sunday’s big game.

Demi Lovato kicked off Super Bowl 2020 with a powerful performance of the National Anthem.

Dressed in a white suit, the pop star showed off her vocal capabilities as she sang “The Star-Spangled Banner” ahead of Sunday’s big game between the San Francisco 49ers and the Kansas City Chiefs at Miami’s Hard Rock Stadium.

Lovato’s appearance at the NFL’s most important event comes just one week after she made her grand return to the spotlight with an emotional live debut of her new single, “Anyone,” at this year’s Grammy Awards, which were held Jan. 26 at Los Angeles’ Staples Center.

Prior to this year’s Grammys, Lovato hadn’t performed live since 2018’s Tell Me You Love Me World Tour, which concluded before her hospitalization in July of that year. She immediately sought treatment and has since talked about her sobriety.

Lovato’s performance of the national anthem occurred hours before Jennifer Lopez and Shakira were set to take the stage for their highly anticipated dual halftime show.

The Business of Music will be an eight-week course running from Feb. 26 to April 16 featuring an array of industry experts as guest speakers.

Even students not enrolled at the university are encouraged to apply for the course website, which will come with a tuition fee of $500 if accepted.

Torae who released his ninth studio album  All Praises Due in 2018 will help students examine various aspects of the music industry through his expertise including the ever-changing digital streaming era, entrepreneurship, marketing, and the function of today’s record labels.

“I am multi-faceted, and I can speak about the culture through a few different lenses, from emceeing to branding, and now as a professor.”

Less than three months after its release, the release of “Tusa” Karol G’s new single along with Hip Hop superstar Nicki Minaj shows no signs of decline.

Since she regained the #1 position this week on the Hot Charts Billboard Latin Songs and seizes the top of the Global YouTube Top Music Videos chart for the second consecutive week.

“Tusa” (the Colombian word for spite) occupies the # 3 spot on the Global Chart of Spotify and remains # 1 in 17 countries as it advances rapidly to the top of the lists around the world and breaks records of reproduction in countries like Mexico.

According to the numbers … Tusa is already certified 8X Platinum by the RIAA in the United States and has more than 750 million reproductions since its launch on November 7, 2019.

Fans, artists and influencers from all over the world have shared their videos to social networks.

Dances and reaction videos have turned “Tusa” into a global movement.

Karol G, was named the Top Latin Female Artist of 2019 and has more than 50 million followers on social networks, which has also set the internet on fire sharing her favorite videos.