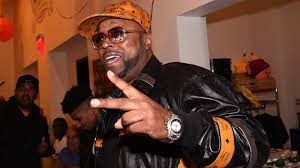 One of Grayson’s better known tags was “Dez”. As a youth involved in New York’s flourishing hip-hop scene, Keith witnessed firsthand the ascent of legendary disc jockeys such as Grandmaster Flash, Grand Wizzard Theodore and Kool DJ Red Alert, in the late 1970s and into the 1980s.

“I didn’t so much set out to be a DJ,” he said. “It was just something to do that was fun and that I enjoyed doing.”

With the decline of the graffiti movement in the late 1980s, Dez began dealing with narcotics and consequently ended up in jail by the late 1980s. Grayson was released from jail in 1990, and claims to have abstained from using drugs ever since. He is from East River Projects located in East Harlem, New York.

DJ Kay Slay released his debut album, The Streetsweeper, Vol. 1, on 20 May 2003. In the summer of 2003, Kay Slay released a single, accompanied by a music video, for a song titled “Too Much For Me”. The single, which features a chorus sung by then-up-and-coming singer Amerie, also features verses from American rappers Birdman, Nas and Foxy Brown.

Although the song was not a major success, its music video was aired on MTV Jams and BET. The “Too Much For Me” video did not feature Nas (because of Nas’ solo projects) or Baby; so Loon was featured instead. This replacement started a feud between Nas and Kay Slay.

On March 30, 2004, Kay Slay’s second album The Streetsweeper, Vol. 2, was released. Another single and video were released for “Who Gives A…Where You From” with Three 6 Mafia, which peaked at number 89 on the Hot R&B/Hip-Hop Songs. Kay Slay and the song were featured on the 2004 NFL Street video game.

After releasing More Than Just a DJ in 2010, Rhyme or Die is scheduled for release in 2015. The album’s first two singles “60 Second Assassins” featuring Busta Rhymes, Layzie Bone, Twista and Jaz-O and “The Kings of the Streets” featuring DJ Khaled, DJ Drama, DJ Doo Wop and Fly Nate were released in 2011. In 2013, “About That Life” featuring Fabolous, T-Pain, Rick Ross, Nelly and French Montana was released as a single from Rhyme or Die.

It debuted and peaked at #54 on the Hot R&B/Hip-Hop Songs chart, making it one of Kay Slay’s most successful singles to date. In the beginning of 2014, “Free Again” was released featuring Fat Joe and 50 Cent, which came as a surprise for some seeing as how they had “beef” before, but have since reconciled.