For this month I bring to you 1 of my favorite female hip-hop artists. I call her Red Head thunder but most people call her Charli Baltimore. I mean when you think of a rider Charli is definitely the first to come to mind. She started her career in 95, word is Notorious B.I.G put her on to “Lance Rivera ” who sign her and Camron to his label Untertainment. After problems with the label on debuting her album “Cold as Ice” , she signed with Murder Inc. All throughout the 2000s we had hit after hit with her features so why was a different label still not dropping her albums. She left Murder Inc and resigned to The Inc in 2008. While most of us are still waiting for her album True Lies to release , Bed full of money is the last song the artist released which was in 2015. There was speculations that IGGY Azalea stole Charli’s verse but the artist responded “In all fairness I don’t think IGGY tried to steal my style, my area was all about lyrical content. I’m really supportive of all females in the game, times have change and it’s so sooo hard for females in this game. So any of them that can make a impact im all for it! I may not like all of it! But I support all the women in the game because this is a man’s game on the real, the women really need to try and come together.” If that isn’t real enough for you then I don’t know what is. Me personally Charli talks a lot about holding her man down which is key to a lot of females. She keeps it 100 at all times and I’m going to wait patiently for that album release. Also Charli Baltimore is cooking up some good stuff on the Set Life it’s rumored she will be in “The Stuff “directed by Rob Stapleton. Salute to one of the hottest female rappers in my book we will be waiting for more album news from Charli Baltimore!

[MOVIE REVIEW] “ALL EYEZ ON ME” TUPAC BIOPIC 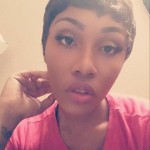 Haitian American making my statement in this world! Catch me if you can. Available for blogs and modeling!
IG: beautiful_being_c
SnapChat: RoseGarden157

IS THE PANDEMIC THE BEST TIME TO INVEST IN YOUR MUSIC CAREER?