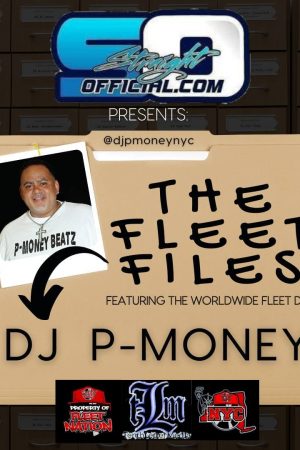 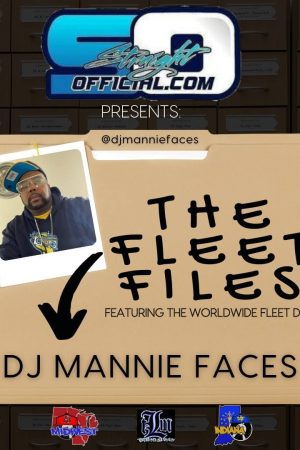 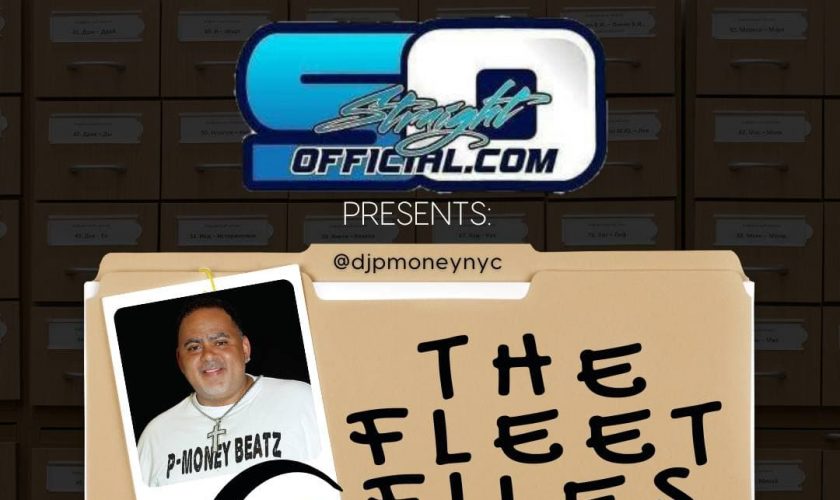 For over three decades, DJ P-MONEY has embodied the importance of his role in Hip-Hop. Even before joining The Worldwide Fleet DJ’s, he knew this was destined to be his calling. I ask him when did he know this is what he wanted to become. He recalled watching a legend do his thing. “I was at a park jam and was amazed watching DJ Hollywood kill the whole park! When I saw the way people were locked in with him, I knew that’s what I wanted to do.”

Born in Brooklyn, Phil Hodnett began DJ’ing at the age of 13. To take anything seriously as a young age was rare, but a change of scenery is what changed his perspective on it. “I moved to Long Island and got real serious about it.” In early 2008 Fleet reached out to him and he has held his position firm ever since. He is the current Assistant Regional Manager for the Eastern region of the Fleet DJ’s.

P-Money also serves as a moderator for the famous Fleet DJ Conference calls. These calls are arranged with some major celebrities in the music industry, such as Drag-On and AZ. These calls are open to fans and gives them the opportunity to hear from and learn more about their favorite artists.

A ONCE AND A LIFETIME OPPORTUNITY

In the midst of his journey, P-Money has had some unique opportunities. When I asked him to tell me about one of them, he recollected on being able to open for legend in Hip-Hop. “My best experience in DJ’ing would have to be opening for Kid Capri at Studio 54.” He would always tell me “Move the crowd!  Don’t worry about what songs are your favorite, and what you want to play.  Play for the crowd and you will never lose!”

One of his major takeaways from that experience was the reaction from the audience. “For me, seeing the crowd move and having people talk to me after a party and tell me that the music I played brought back so many great memories for them… that is not just inspiration, that is motivation for me to keep doing what I do.”

For every peak in his journey, he has dealt with his fair share of valleys. He told me about an embarrassing experience that happened at an event. “My worst experience was when I was asked to DJ my first Park Jam and when I turned on my power, I fried my bass amp!  I was so embarrassed. One of the OG DJ’s asked if I had a spare and I told him I left it at home.  I had to listen to a 15 minute speech on why that was the dumbest thing I could ever do.”

Being prepared is the biggest lesson he learned from this situation. “Always follow your mind, and take all of your equipment, even if you aren’t going to use it all because you just never know.”

Be yourself.  You have a gift that no one can take from you.  Make timeless music that people will want to play 20 years from now. Also, make sure your business is straighter than 6 o’clock.

WHAT P-MONEY HAS IN STORE

P-Money has his hands on more than just the one’s and two’s. While also working as a producer, he manages an artist out of St. Louis as well. I asked him about some of his current projects. “I have 3 mixtapes that I am working on at the moment.  Two are with DJs out of South Carolina. They each have beats that I made and they are putting acapellas to them.  Both of them are going to be BANANAS!”

Every DJ has a story behind their stage persona. I asked P-Money how his came to be and his story was intriguing. “My original name was Grand Wizard Speed. Then I made the decision to get involved in the streets, and there was an OG that was always around and he used to call me P. He said that was his way of not letting people know anyone’s name while in the street.” He invested in himself saying “I went out and bought a rope chain, like Run DMC used to wear. He saw it and started calling me P-Money and the name just stuck.”

I had to know who is P-Money rocking in his current playlist. He said, “I have some Pop Smoke, Mos Def, Wu Tang, Frankie Knuckles, Earth, Wind & Fire, Nas, AZ, Boot Camp Click, Jay-Z…too many songs to name!” (laughs) For as much fun as he has doing what he does, he also offered up some good advice to upcoming artists. “There a lot of people in the music industry that are just looking for a come up. Don’t fall into that trap.  Know your worth.  Let your talent and experience speak for itself.  Don’t ever sell yourself short because you want a gig.”

I am all over the place when it comes to music. It speaks to me.

The Fleet DJ’s have a remarkable talent in P-Money. He is vested in his position and understands his assignment in both the coalition and in the movement. He expressed mad love for the team in closing. ” I have to shout out my brother from another my guy Klassik, CEO of the Fleet DJs.  You have always seen my potential and you in your own way keep me moving and I appreciate you for that.  My Fleet Brothers, DJ Baby G, DJ Teph, DJ Say Whaat, DJ K Swift, DJ Skinny, DJ Four5, DJ Shells, DJ Dre Cee, DJ XXL, DJ Handzdown, DJ Gojabean, DJ Mannie Faces, DJ Earl-E, DJ Hot1ne, DJ Pinki3, DJ Pynk Dyamond, Mizz Official, Clarity In Focus, Nia Boom…I could go on!” (laughs) 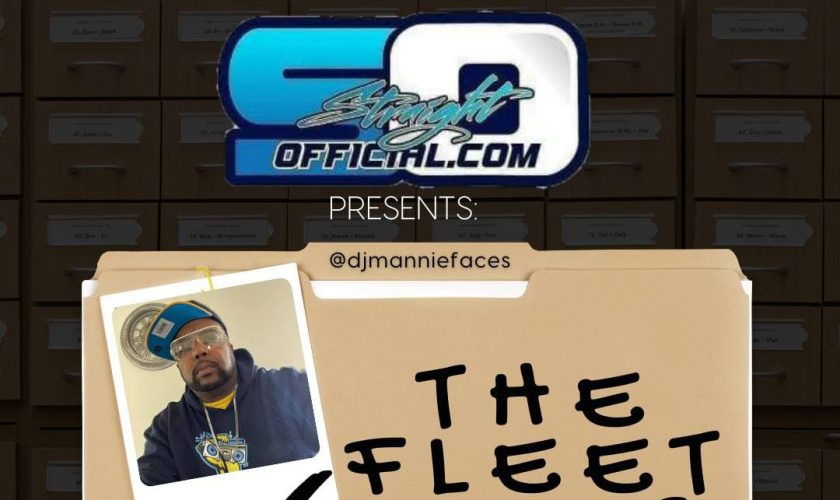 WHO IS DJ MANNIE FACES?

Born in Indianapolis, Indiana DJ MANNIE FACES is a relatively new face to The Fleet DJ’s. Joining the coalition in August, he admits that while he hasn’t had enough time to grasp everything. But, he’s never been more ready to shine for his city. During his teenage years, Mannie almost gave up on becoming a DJ for other visions. “I quit DJ’ing when I was 14 and started rapping because me and my friends saw Krush Groove and thought that we were going to make it big.”

The decision to get back on the ones and twos came after surprising one of his friends with his talent. “One day I went over to my friends’ house. He had some tables so I decided to mess with them for a little bit. This friend in particular never knew I was a DJ, so in shock he’s like “Bro, I had no idea you could spin!” He’s one of the inspirations that got me back spinning.”

Born Herschel Kirk, DJ Mannie Faces may also have a familiar face to some of you movie buffs. Back in 2000 when he relocated from Indiana to California, he threw his hat into the acting circle and found success initially. “When I moved to Oakland for a little bit, I got the chance to act in a movie called Consequences in which I played a decent role but, I was killed in the movie,” he laughs about now today. Mannie then moved back to Indianapolis, where he settled down to marry the love of his life and raise his three children.

I got the name Mannie Faces from a friend of mine. We were over to my cousin’s house and he had some tables so I gave him a little taste. He only knew me as a rapper, so it amazed him to where he began calling me Man E. Faces, meaning a man of many talents. I just changed the spelling to Mannie Faces.

Mannie Faces on how he got his name

MANNIE ADAPTS TO THE NEW TERRAIN

Even though Mannie is fairly new to Fleet, it hasn’t hindered him in wanting to grow in his craft. I asked him who’s currently in his playlist. “Right now honestly the current songs in my playlist are all Fleet DJ exclusives and anything on the Fleet DJ radio network. I’m soaking up all this game because you can never stop learning when you’re spinning. There’s always something that you can add to your technique.” In balancing work and a personal life, Mannie is also the owner of Strong Side Radio as well as getting ready to drop a new project for 2021. “I have a project called Crowd Control that is scheduled to drop on September 24th that features various artists from the Midwest that are bringing that HEAT!”

With anything in life, there will be some setbacks in the journey to your path. I asked Mannie about any experiences that stuck out to him. He recollected on a moment that gave him hindsight. “One of my worst experiences was when I was booked to do a show and when I arrived, there was already a DJ there! I was told that it was miscommunication on my end, which wasn’t the case at all. The biggest takeaway from that situation for me was to ALWAYS secure a deposit to avoid messes like that.”

On the flip side, Mannie said his greatest experience was being accepted by Fleet and gaining his peer’s respect. “Anyone can give themselves the title of DJ, but the honor is really bestowed upon you once you earn it from your peers. Putting in the work will always get the desired results and I am ready to show and prove for my team and my city!”

Having a team like Fleet has enabled me to build on my dreams, live a healthier life and strengthen my relationships with others.

DJ Mannie Faces on his position with Fleet DJ’s

DJ Mannie Faces is a great addition to a growing coalition. The love is in fact there as he expressed to me in closing. “Much love to my Fleet Nation! Strongside Radio, Dj Headrush, DJ Bigtymer, DJ Tone, DJ Chill, DJ P- Money, Dj WillyBangz, Klassik Ceo, DJ Baby G, DJ Hot1ne, DJ Mos Precious… I can keep going!! Love to the whole Fleet Nation and thanks to Jay Mill (TenthLetterMedia) for the interview. My Famous words…. Lets Get it!!!